“I have a love-hate relationship with writing. First the hate. It’s difficult. Finding language for ideas, then finding better language. During my years as a probation officer I occasionally heard colleagues joke (sort of) that the job would be great if it weren’t for the clients. I sometimes feel the same way about writing and language. Some writers swoon over language: “It’s my muse, my lover”, and so on. Well, it’s my enemy, and I seem to spend all my life arguing and battling with it. Also, sitting down at a desk aggravates my sacroiliac joint, so by the end of a week of solid writing I’m pretty much bed-bound or crawling around on all fours.

What else? Writing is static, unsocial, and restricts opportunities for the uptake of vitamin D via dermal synthesis. I know what you’re thinking: “Poor thing, must be awful.” As for the love, nothing absorbs or engages me more than composing a poem, trying to cajole it into shape, trying to get the sound of it and the sense of it operating in concert, trying to get to that place where the writing transcends by every measure its original intention and ambition, the feeling of having created something inconceivable.

In terms of the average day, if I’m at home I’m attempting to outstare and outsmart the computer, which means I’m writing prose or drama or a lecture or something that isn’t poetry. I switch on about nine and go until I can’t stand my proximity to myself any longer. And I build in displacement activities: I need to go to the post office (I don’t) or there’s no milk in the fridge (there is).

Getting out of bed of a morning has never been a problem, but I’ve noticed of late that my writing is better in the afternoon. The mornings are methodical, when all the blockwork and first-fix stuff takes place. The ornamentation or even de-ornamentation – the things that separate writing from writing – don’t seem possible until later in the day, when I’ve established some perspective.

I like the notion that I’m a spy – poetry as espionage, doing something I shouldn’t.  To that end, there’s a table tennis table in the basement, and if there isn’t time for a walk or the weather is a bit clumsy I’ll go and hit a ball for half an hour to defrag my brain. This is achievable by raising the further half of the foldable table into the vertical plane to form an unbeatable opponent. There is something very cathartic about the sound of the highly strung plastic ball meeting the implacably hard playing surface or the cushioned rind of the bat. Also, certain other sports or leisure activities are difficult to play on your own in your lunch hour – rugby union, for example.

If I’m away then I’m working in a small hardback notebook with graph‑paper pages, so I’m writing poems. I used to write poems on anything that came to hand – court reports, chocolate wrappers, the undersole of a slipper – and had a filing system that made Emily Dickinson’s scraps of scavenged paper look more orderly than a spreadsheet. But everything happens in the notebooks now, and they have come to represent a kind of companionship. I also sketch in them (badly) and keep a journal. I like the physicality of shaping letters and words, and the materiality of pen against paper, and the archaeological record of trial and error that builds up across the pages, and the notion that I’m a spy – poetry as espionage, doing something I shouldn’t. The graph paper helps me plot the length of lines against each other and gauge the size of the poem as it might appear in printed form.

I’m naive or obstinate enough to still believe in the line as poetry’s fundamental unit of expression and in line- and stanza-breaks (as applied by the poet, not the typesetter) as the device that ultimately differentiates poetry from prose. I’m happy writing poetry in a cafe or a public space. In some ways I prefer it, though it’s pointless if music is playing, because the rhythms and cadences start to clash.

As a rule (ie not always) I don’t drink during the week. Once the cork comes out of the bottle it’s curtains, so for that reason and others I tend to down tools at weekends. And I’ve always resented writing on Sunday evenings, the theme tune to Antiques Roadshow or Songs of Praise reminding me that I haven’t done my homework.”

• Simon Armitage’s new book, The Unaccompanied, is published by Faber.

The dynamic Kathryn Hummel has a project going, called “Friends with Drinks”. If you have anything artistic to contribute on the theme of drinking with friends anywhere in the world: words, images, whatever, have a look at her tumblr page and submit, submit, submit. Kathryn kindly published my “Art of Boozing” yesterday:

The Art of Boozing (after Elizabeth Bishop)

Submission are via the tumblr page.

I heard Colum McCann interviewed this morning on ABC RN. It mainly concerned his new novel “Thirteen Ways of Looking”, which Michael Cathcart (admittedly prone to hyperbole) describes as “the perfect book”.  You can listen to the podcast here.

But I was also intrigued by mention of his “Letter to a Young Writer”, and went looking for it. Here it is, and I think it contains brilliant advice:

Do the things that do not compute. Be earnest. Be devoted. Be subversive of ease. Read aloud. Risk yourself. Do not be afraid of sentiment even when others call it sentimentality. Be ready to get ripped to pieces: It happens. Permit yourself anger. Fail. Take pause. Accept the rejections. Be vivified by collapse. Try resuscitation. Have wonder. Bear your portion of the world. Find a reader you trust. Trust them back. Be a student, not a teacher, even when you teach. Don’t bullshit yourself. If you believe the good reviews, you must believe the bad. Still, don’t hammer yourself. Do not allow your heart to harden. Face it, the cynics have better one-liners than we do. Take heart: they can never finish their stories. Have trust in the staying power of what is good. Enjoy difficulty. Embrace mystery. Find the universal in the local. Put your faith in language—character will follow and plot, too, will eventually emerge. Push yourself further. Do not tread water. It is possible to survive that way, but impossible to write. Transcend the personal. Prove that you are alive. We get our voice from the voices of others. Read promiscuously. Imitate. Become your own voice. Sing. Write about that which you want to know. Better still, write towards that which you don’t know. The best work comes from outside yourself. Only then will it reach within. Restore what has been devalued by others. Write beyond despair. Make justice from reality. Make vision from the dark. The considered grief is so much better than the unconsidered. Be suspicious of that which gives you too much consolation. Hope and belief and faith will fail you often. So what? Share your rage. Resist. Denounce. Have stamina. Have courage. Have perseverance. The quiet lines matter as much as those which make noise. Trust your blue pen, but don’t forget the red one. Allow your fear. Don’t be didactic. Make an argument for the imagined. Begin with doubt. Be an explorer, not a tourist. Go somewhere nobody else has gone, preferably towards beauty, hard beauty. Fight for repair. Believe in detail. Unique your language. A story begins long before its first word. It ends long after its last. Don’t panic. Trust your reader. Reveal a truth that isn’t yet there. At the same time, entertain. Satisfy the appetite for seriousness and joy. Dilate your nostrils. Fill your lungs with language. A lot can be taken from you—even your life—but not your stories about your life. So this, then, is a word, not without love, to a young writer: Write. 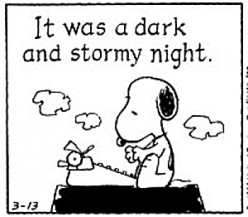 “This is something I have never talked about publicly. Five years ago, shortly after my beautiful daughter’s third birthday, I was diagnosed with advanced SWS — Shit Writing Syndrome.

I’ll assume you’ve never heard of it. I hadn’t. Webster’s Dictionary defines Shit Writing Syndrome as “a disorder that turns one’s writing to shit, for example, by causing one to quote this dictionary when describing the disorder.

The mechanics of the disease are still not well understood. Some experts believe that fecal matter leaks out of your colon and travels through your lymphatic system into your writing. Others think it’s figurative. But those distinctions matter little when you are looking at a page of your own writing and seeing shit.

They found it by accident. I had gone to the doctor for a routine penile enlargement procedure. I had filled out the standard Writers Guild insurance forms, and that’s where it turned up. When my doctor walked into the room, she had a hard time making eye contact.”

Find out how he cured himself:

And there is a Fulham connection above. Those famously bad opening lines “It was a dark and stormy night” were penned by Edward Bulwer-Lytton. Lytton  once resided in the original Craven Cottage, now the site of Fulham’s beautiful old ground, which still has a Craven Cottage in the corner (below).

Fulham have, of course, been suffering for some time, not from SWS, but SFS (Shit Football Syndrome). 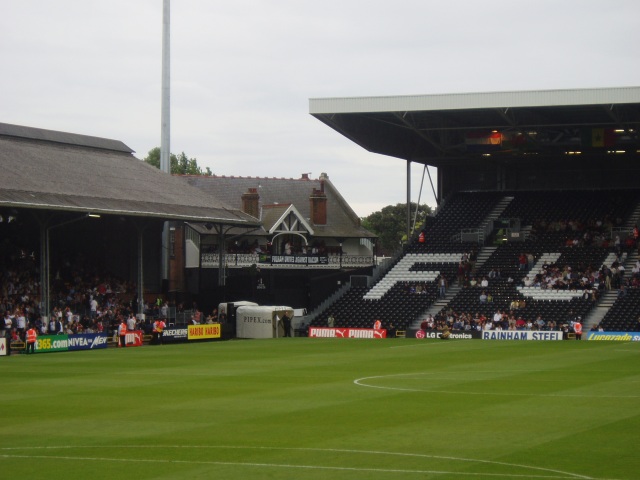