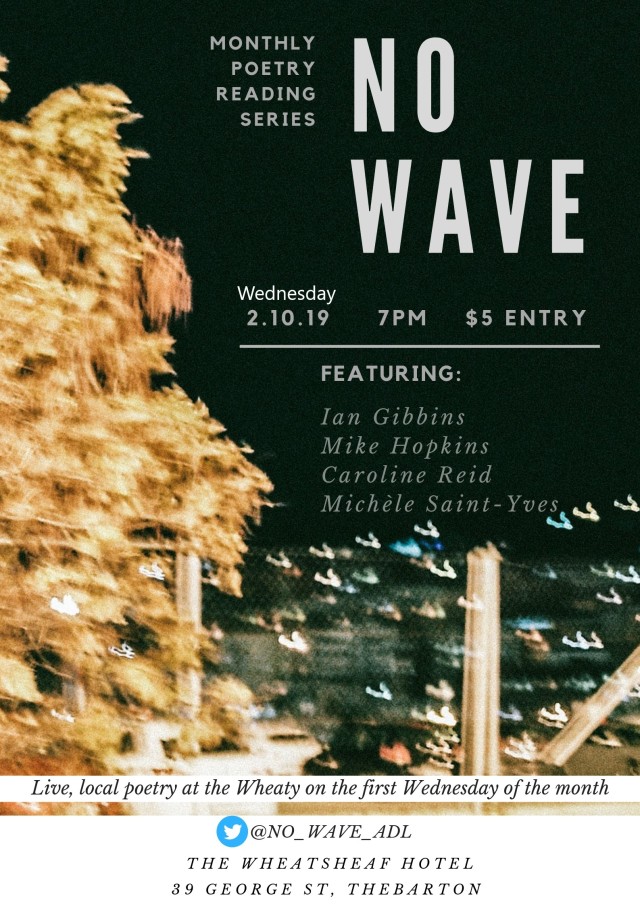 The monthly No Wave readings are a sort of heir to the long-running Lee Marvin readings which stopped a few years ago. Curated by Dom Symes, Banjo James and Olivia De Zilva, they usually feature four invited poets. Each poet reads for ten minutes with a break between the second and third readers. The Wheatsheaf is a great pub, serving a wide selection of their own and other micro-brewery beers, wines and spirits. Always a nice buzz at these readings. Get along if you can. $5 entry.

How Late it Was, How Late by James Kelman

Sammy’s wisdom: “Folk take a battering but, they do; they get born and they get brought up and they get fuckt. That’s the story; the cot to the fucking funeral pyre.”

James Kelman won the Booker Prize for this novel, in 1994. It was, apparently, a controversial winner, mainly because of objections to the profane language. The book is in Scots dialect, from the point of view of Sammy. We first meet Sammy waking from a monster hangover, the cause of which he cannot remember. He soon picks a fight with some “sodjas” (policemen), and ends up in a police cell, waking again to find that he has lost his sight as a result of the beating he received. The rest of the book is his stream of consciousness as he comes to terms with this disaster, which it seems is just one of many, many disasters which have befallen him. He is estranged from his wife and son, his current girlfriend has disappeared, he has had spells in prison, there are suggestions of politically motivated violence, he has no money and, it seems, no friends he can rely on.

“Ye wake in a corner and stay there hoping yer body will disappear, the thoughts smothering ye; these thoughts; but ye want to remember and face up to things, just something keeps ye from doing it, why can ye no do it; the words filling yer head: then the other words; there’s something wrong; there’s something far far wrong; ye’re no a good man, ye’re just no a good man.”

I found Sammy a surprisingly sympathetic character. His outlook on life is philosophical, almost Buddhist at times. He holds no animosity towards the police who beat him. Towards the end, when his estranged son appears, their relationship is quite touching. Also evident is the kindness towards him of neighbours and Glasgow locals.

This is not an easy read. I’m not familiar with Scots, but perhaps my Irish / English origins made it fairly easy for me to understand. Others might find it hard going. But it is a tremendous achievement to hold the reader’s attention, as it did mine, by describing the inner thoughts of a newly blind man who exists on the margins of society, who utterly distrusts authority and has little hope of redemption.

“Waiting rooms. Ye go into this room where ye wait. Hoping’s the same. One of these days the cunts’ll build entire fucking buildings just for that. Official hoping rooms, where ye just go in and hope for whatever the fuck ye feel like hoping for.”

Grief is the Thing with Feathers by Max Porter

This is a poetic story of the process of grieving. None of the characters are named: a man, a woman who has just died, two young sons and the presence, in the man’s psyche at least, of a crow. Each brief chapter is from the point of view of one of the characters. Also looming large in the background is Ted Hughes, about whom the man is writing a book. Hughes’ “Crow: From the Life and Songs of the Crow”, has likely been central to the man’s literary history. This is a short but very intense story of a man and his sons, much disturbed by the death of the most important woman in their lives, and their process of returning from the pit of despair to ‘normality’. It is written in short, imagistic, disjointed chapters with sections which are more poetry than prose.

A moving and brilliantly conceived experimental approach to the important subject of grief.

View all my reviews