Along with a number of talented performers, I am guest poet at the SPIN gig in McLaren Vale on December 3rd 2016. I’ll be reading from my recent chapbook, “Selfish Bastards”, plus other work. Thanks to Julia Wakefield-Houghton for inviting me. She’s given me a 20 minute slot, which is long by poetry reading standards. Perhaps an opportunity to respond to world events of 2016! 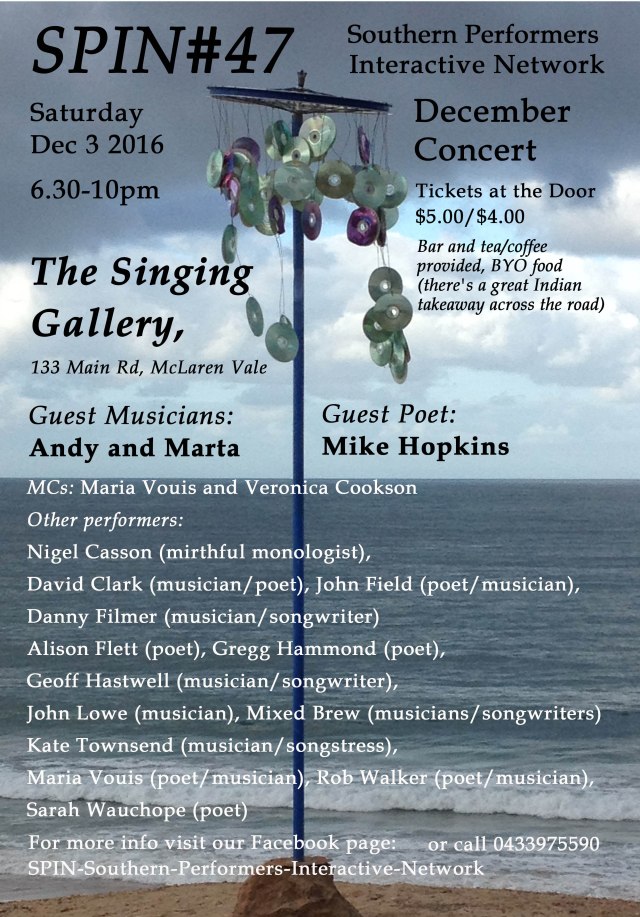 (thanks to Liz Zaccara and Tracey Korsten)

From The New Yorker

AT THE RISK of sounding like a total candy-ass, I swear I have developed P.T.S.D. from the venom of this election. O.K., even before voting season began, I was wobbly enough to be seeing a shrink. But when I confessed to her, a month ago, that I was sleeping less and checking news outlets compulsively, like a rat pushing a bar down for a pellet, she said, “So are a hundred per cent of my patients.” Then she added, “So am I.” A friend’s cardiologist told her that patients had been flooding into his office or calling from emergency rooms with false reports of tachycardia.

Those of us who experienced trauma as children, often at the hands of bullies, felt old wounds open up just hearing Trump’s fierce idiom of outrage. All of us used to be kids. All of us were, at some point, silenced by someone bigger and louder saying, “Wrong, wrong,” but meaning “It’s not what you’re doing that’s wrong—it’s who you are that’s wrong.”

Language is key. Trump’s taunting “nyah-nyah”s are the idiom of threat and vengeance. For him, it’s not enough to ban abortion; women who have abortions should be punished. It’s not enough to defeat Hillary Clinton; we have to hate, jail, and possibly even kill her. Eric Trump responded to David Duke’s endorsement not by saying, “We don’t want his vote,” but with the line “The guy does deserve a bullet.”

This violent poetry has been gathering force on our airwaves for decades. It started with shock-jock radio and moved to Fox News. Then, there’s the ubiquitous browbeating by social media, which, I suspect, has contributed to the tripling of the suicide rate for adolescent girls in the past fifteen years.

It was only a matter of time before a hair-triggered guy took this vernacular to the national political stage. Nasty talk didn’t start with Trump, but it was the province of people we all viewed as idiots— schoolyard mobs, certain drunks in bars, guys hollering out of moving cars.

When a Presidential candidate mocks a disabled man or a Muslim family that has sacrificed a son for our country, the behavior is stamped with a big “O.K.” Some Trump supporters felt O.K. shoving and hitting protesters. At a Wisconsin football game, a fan wore an Obama mask and a noose.

If you ever doubted the power of poetry, ask yourself why, in any revolution, poets are often the first to be hauled out and shot—whether it’s Spanish Fascists murdering García Lorca or Stalin killing Mandelstam. We poets may be crybabies and sissies, but our pens can become nuclear weapons.

Like Trump, I trained early for the gutter brawl. I grew up in a huge state with an “X” in its middle, marking the place where the mouthy and the wellarmed crisscross the boundaries of propriety like cattle rustlers. Littler than my cohort, I learned that a verbal bashing had a lingering power that a bloody nose could never compete with. When a boy named Bubba said, “Your mama’s a whore,” I shot back, “So what? Your nose is flat.”

The vicious language of this election has infected the whole country with enough anxiety and vitriol to launch a war. American lawn signs used to be lowkey. You might see venomous slogans on bumper stickers, but not where anybody actually lived. In Florida this Halloween, one yard featured black effigies hanging in the trees above a Trump sign. Strange fruit indeed.

Whatever you think of Hillary Clinton, there’s no question that she was the more circumspect candidate, and that’s partly why her detractors hated her. She was “politically correct.” By my yardstick, that means trying not to hurt people’s feelings (whether Bubba said something mean about your mother or not). And yet, among a huge portion of our population, this registers not as civility but as insincerity.

We Democrats have mostly tried to follow Clinton’s example, but I confess that, among friends, I’ve often enjoyed making ad-hominem attacks on Trump and his family in a way that—on reflection— shames me. And, certainly, the left has made use of that insidious “If/then” construction that Trump favors (i.e., “If I were President, you’d be in jail”). A putative friend once told me, “If you eat endangered fish, I won’t be friends with you anymore.” I replied, “If I cared more about a fish than a person, I’d examine my values.”

Today, I’m examining my values. As a Buddhist pal said to me on Election Night, “America has spoken.” Now it falls to us to listen with gracious and open hearts. This is not giving in or giving up. The hardest thing about democracy is the boring and irritating process of listening to people you don’t agree with, which is tolerable only when each side strives not to hurt the other’s feelings. To quote my colleague George Saunders, let today be National Attempt to Have an Affectionate / Tender Thought About Someone of the Opposing Political Persuasion Day. And (please, God) every day hereafter as well.