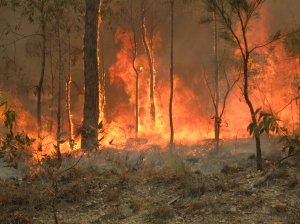 This is the third assignment for the MOOC, “Whitman’s Civil War: Writing and Imaging Loss, Death, and Disaster“, through the University of Iowa.

This assignment is described as:

“The kinds of oxymoronic reactions that Whitman had toward the war are some of the most difficult to articulate in words—to express how one can both hate and love the same thing, find it beautiful and horrifying, sustaining and devastating.” In words or images, compose a response to an event or experience that invoked this kind of contradiction for you. Consider how craft can call upon contradiction—in form, syntax, diction, metaphor, exposure, or juxtaposition—and employ those elements in a manner most fitting to your experience.

I took some key words and partial sentences from an ABC interview with a survivor of the 2009 Victorian fires, just as Whitman took newspaper reports as the basis of some of his prose and poetry.

It was forecast: the worst heat on record. Nobody can say they weren’t warned. The day started bloody hot and got hotter. We knew straight away that this was more than a hot one, it was going to be a catastrophic one. The wind blew up from the west. It was like being inside a fan forced oven. By late morning, the sky was still clear, but somehow threatening. I went inside for a cold drink. When I came out, there was a column of smoke, thousands of feet high. It was a straight column and it loomed right over us, directly above our house. The sun was directly behind it. The column had white edges, like cumulonimbus. And then it was all sorts of colours, but at its heart it was ochre – deep, deep ochre. Balls of yellow fire hit the deciduous trees around the house. Flames went into the trees, smoke shot out. All around the house, the light went golden. Through every window it went golden at the same time. We felt a burning, radiant, ferocious heat, and then it passed. We just huddled together on the floor, waiting to die, but somehow it passed. The only thing that saved us was the sprinkler system on the roof. The fire passed right over us without igniting the house. I don’t really know how.

Please tell me what you think? Cancel reply