John Malone told me that Billy Connolly was a big McGonagall fan, so I did a bit of searching on Youtube and found this gem.  Connolly recites McGonagall’s ‘poetry’ with great gusto, and says he was a great Scotsman.  But even he states that McGonagall must have been quite mad.  And that’s something coming from Connolly. Worth watching to the end to hear the story about the plate of peas!

But for the last word on McGonagall, here is Spike Milligan:

There’s a lot of it about. I’ve written some myself, and I usually keep it to myself.  But I’ve also written some deliberately bad poetry. In fact, I think writing bad poetry might be one of my strengths.

A few years ago, talking to Russ Talbot, one of us said “Have you read any McGonagall?”, and we dragged out McGonagall’s poem about the Tay Bridge disaster.  This is surely the worst poem ever written.  I’ll give you an excerpt (you can find the whole, sorry epic at: http://tinyurl.com/7nhg6gr)

Extract from “The Tay Bridge Disaster” by William Topaz McGonagall

Beautiful Railway Bridge of the Silv’ry Tay!
Alas! I am very sorry to say
That ninety lives have been taken away
On the last Sabbath day of 1879,
Which will be remember’d for a very long time.

See what I mean?  Who but McGonagall would ever have thought of rhyming buttresses and confesses.  That’s a special kind of brilliance.

McGonagall was quite a celebrity in the late 19th century. His recitations were very well attended.  Maybe he was the first comic performance poet. But it seems he took himself quite seriously, being unaware of his true awfulness.

Inspired by McGonagall, I offer up a few of my own really, really bad poems in which I imagine McGonagall visiting Adelaide.  The first is about Unley, the council area where I live. (Unley Council refers to the area as a “City of Villages”).  In the second McGonagall buys into the rather petty rivalry between Adelaide and Melbourne.

I admire your facilities, which funnily

Cost your ratepayers much money

But they are generous people who lovingly

Water their nature strips when it is sunny

Oh Unley you are the fairest council area

In Adelaide.  Your male residents chests are hairier

Your females’ cleavages cause me to stare at ya

Unley is the best place in Australia to reside

Far better than Mitcham or Marion or Burnside.

They say that in heaven you were made

You sit upon the Torrens

And can be viewed from Mount Lofty through a telescopic lens

One million people live on your plains

And mostly are happy, though some do have pains

Your western boundary is the briny water

Your eastern is hills which make my legs falter

And look upon Melbourne with nothing but pity

This time of year in Adelaide means, the Jacarandas and Geraniums are in full flower. If you’re lucky, the scent of jasmine may pervade your garden as well. Jacaranda are all around the suburb where I live.  They burst into bloom, and then shower flowers onto the roads and pavements, giving a sort of ‘purple mirror’ effect.  If Jimi Hendrix was still around, he’d write a song about them.

I first saw Jacaranda in Zimbabwe.  In full bloom, they take your breath away. Photographs don’t do them justice somehow. They were prevalent in Harare and its suburbs. The best display was in what used to be called Cecil Square (named after Cecil Rhodes), now called African Unity Square. Here are a couple of shots from outside our house in Adelaide, and then one from Cecil / African Unity Square.

They are native to South America, but now you’ll find them in warmer climates all over the world: Africa, India and Australia.

Anyone spotted Jacaranda in unexpected places?

I was out having a curry last night with some friends, in Adelaide, and the subject of Zimbabwe came up.

I lived in Zimbabwe (and Malawi) for four years in the early 80s.  This was just after Mugabe came to power.  It’s hard to believe now, but in those days Mugabe was, at least in words, pro-reconciliation with the remaining white population of the country. He seemed to see the need to keep the white farmers and their expertise, to provide some economic stability to the country.

I was house-sitting for a while.  One Saturday morning, the African cook and gardener of the house were going off to a ZANU-PF rally where Mugabe was going to speak. I tagged along with them. Not many white faces in the crowd, but it was a good-natured rally, and I felt perfectly safe.  Here are a few pics, of the crowd, and of the ZANU-PF ‘boys’ arriving. 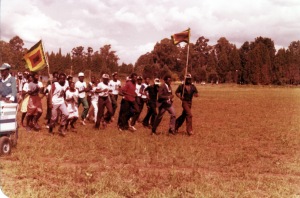 Nowadays of course, such a rally would have an entirely different atmosphere.  You wouldn’t want to be a white person or a Morgan Tsvangirai supporter amongst them.  Pure thuggery would be the order of the day.

But when I was there it was a mostly peaceful place, especially considering the recency of the civil war.  The infrastructure was good, the economy was spluttering along not too badly, the people were friendly and open, the wildlife and the national parks were sensational, tourists were relatively scarce.  I used to go on long walks in remote places with the mountaineering / bush walking club, and saw all sorts of animals at close quarters.  Sometimes too close for comfort.  All in all, it was just a fantastic time to live there.

I have a few poems about those days.  This one recounts an incident when doing a long 4-5 day walk along a remote part of the Zambezi, sleeping on the ground at whatever spot we found ourselves at the end of the day.  On this particular day, we saw two lions running off from the spot where we were going to sleep the night:

Banks of the Zambezi

We didn’t think too much of it. Until…..

On the Banks of the Zambezi

We cowered by the fire


the dark where now and then


then a mounting roar

a foul smell of urine on the night breeze

intended to make us panic and run

into the maw of the she-lion downwind


we fed the fire, huddled closer

the lions tired of the game

Does it have to be one or the other?

Hmm. Not sure he’d like my stuff.  Glad he wasn’t judging last year when I entered.  He may have a point. But then again, what’s wrong with being a poet  AND a stand-up comic?  What’s the difference between a poem that makes you laugh and an imaginative joke?

Bill Hicks started appearing in stand up comedy clubs whilst he was still at school.  His material evolved to be truly challenging and confrontational.  Unfortunately he contracted pancreatic cancer and died in his early 30s.

Watching television is like taking black spray paint to your third eye.
We all pay for life with death, so everything in between should be free.
Your denial is beneath you, and thanks to the use of hallucinogenic drugs, I see through you.

To me, they are a class apart from your average stand up comedian’s material. A bit of rearranging and a few random line breaks and there’s poetry in there.   If Bill was a haiku poet he might have written:

on my third eye

The cost of life

is death and all between

And what about someone like Spalding Gray?  Gray, who died in 2004 was an American actor, playwright, screenwriter, performance artist and monologuist, known for his “personal narratives”. He had a role in the film The Killing Fields.  His play, Swimming to Cambodia, describes both his experience in making the film, and how the Pol Pot regime came to power.

Is he a comedian, a monologuist, a poet or all three?  I dare anyone to categorise this tour de force:

Charles Bukowksi and Alan Ginsberg often had their audiences in stitches, yet many regard them as great poets. 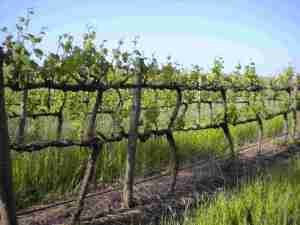 I cycled down to McLaren Vale a few weeks ago. Longest cycle I’ve done in a few years, and not helped by a fierce head wind all the way down.  I stayed overnight with my friend Krishan Persaud and his lovely family, in Port Willunga, and cycled back next morning.

The reason (as if a reason is needed to cycle 3 hours each way): a workshop and slam at a winery on the Saturday afternoon and evening, attended by a small but high quality group.  Sandra Thibodeaux, the official Poet in Residence of Australian Poetry for 2011, gave a really good haiku workshop, sitting outside the winery, and then going for a walk in the area to find inspiration.

a black girl and boy walk hand in hand

on a blue bucket

at the end of each row of vines

over a swelling hill

holding the land down

stare down on common weeds

seen their type before

In the rank and file of weedy growth

stake a claim for artistry